The Renewal Opportunity Dashboard allows Funders and Brokers to view a list of Merchants who may be qualified for a "renewal" or "refinance" based on the repayment percentage against an existing merchant cash advance. MCA Suite also allows users to calculate percentage repaid using Actual or Estimated amounts. 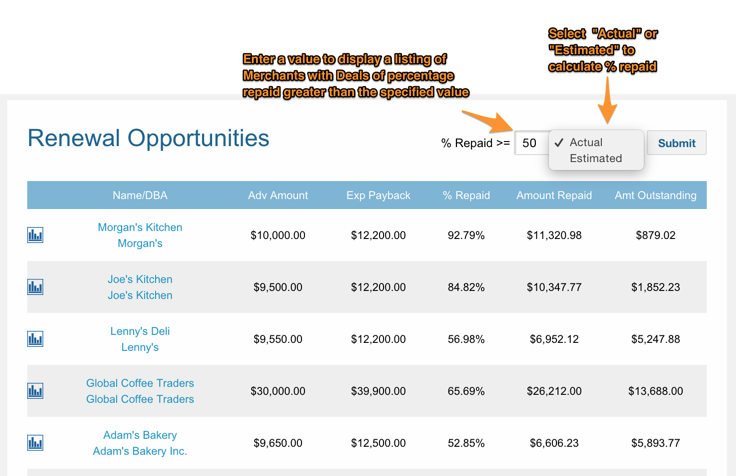 To view the list of Merchants, users will need to supply MCA Suite with the following parameters:

1.  Percentage Repaid -- This is the percentage the Merchant has repaid against the Expected Payback Amount of the merchant cash advance deal.

2.  Use either "Actual" or "Estimated" amounts to calculate percentage repaid

Calculating the Percentage Repaid using Actual amounts requires the Merchant Cash Advance Deal to be in "Deal Tracking" (funded) and have transactions applied to the funded deal. Funders using MCA Suite will most likely use this feature as they will see actual collections applied to the Expected Payback.

Calculating the Percentage Repaid using Estimated amounts requires the Merchant Cash Advance Deal to be in "Deal Tracking". As a broker, this will likely occur after creating one or more submissions and selecting an offer that a Funder has agreed to. Users must also define the "# of Payments" value in the Contact Terms section of the Deal Details page and an Expected Daily Rate to be entered, greater than 0 (see below).

For MCA Suite users who are Brokers, they may not know how the Merchant is repaying the Funder. MCA Suite can use the # of Payments value and Expected Daily Rate to estimate when a deal may be at a certain repaid percentage and display it to the Brokers, who can then choose to contact the Merchants to discuss renewal/refinance procedures. To estimate the Percentage Repaid, MCA Suite will to do the following:

2.  Assume the Expected Daily Rate ($125 in the example from above) is being made by the Merchant with each payment

3.  The # of Payments (i.e., 100) does not change because the Merchant is paying based on the agreed contract.

4.  The Merchant does not incur penalties such as fees that could increase the Payback Amount.